Holiday concerts continue this weekend! Spring 2019 Concerts: Out of this World 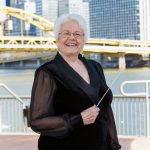 Nancy R. Lutz, who has led Three Rivers Ringers as Artistic Director for the past 8 years since the founding of the organization is planning to retire at the end of the Spring 2019 concert series. Mrs. Lutz conducts the ensemble in upwards of 15 performances each year throughout Western Pennsylvania and beyond, and has been the driving force behind the artistic vision of the ensemble since its founding in 2010. A search has begun for her replacement.

Nancy Lutz was one of the five founders of Three Rivers Ringers, which was created and steered by handbell musicians who performed in Mrs. Lutz’s church handbell choirs at Mt. Lebanon United Methodist Church. Mrs. Lutz directed the Chapel Bells and the Promise Bells at the church for over 20 years, and plans to continue in that role. “Three Rivers Ringers is the fulfillment of my long-time dream of creating Pittsburgh’s first community handbell ensemble, dedicated to excellence in performance and creativity in programming,” said Mrs. Lutz. “I’m incredibly proud of what we have accomplished in the first eight years.”

Mrs. Lutz was instrumental in securing rehearsal space and the use of equipment initially. Her decades of experience and connections with both the national handbell Guild (Handbell Musicians of America) and the local handbell community enabled finding local musicians and performance venues.

Among the highlights of Three Rivers Ringers’ accomplishments over the last 8 years under Mrs. Lutz’s direction are performing at the biannual General Assembly of the Presbyterian Church (U.S.A.) in 2012, performing at Handbell Musicians of America’s National Seminar in 2016, and performing with the renowned Pittsburgh Symphony Orchestra on the Highmark Holiday Pops for two consecutive seasons in 2015 and 2016.

Asked about the direction of the organization going forward, Mrs. Lutz responded: “I believe the future of Three Rivers Ringers is secure. We’ve grown steadily in every way possible over the years and will continue to do so under new leadership.”

The Artistic Director for Three Rivers Ringers is responsible for conducting the 17-member ensemble at weekly rehearsals, conducting concert series in the winter and spring, creating an artistic vision for the ensemble, programming the two concert series, and mentoring an Assistant Conductor. The Artistic Director reports to Three Rivers Ringers’ Board of Directors. Email managingdirector@threeriversringers.org for more information.