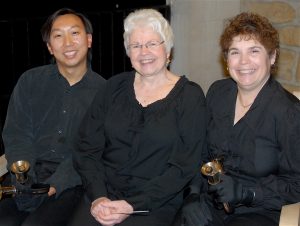 Three Rivers Ringers was founded in 2010 by five handbell musicians with the goal of achieving musical excellence, performing challenging repertoire, and pushing the boundaries of the handbell art form. Today, TRR is a significant contributor to the arts culture in Western Pennsylvania, performing both private and public concerts 10-15 times per year in winter and spring.

TRR performed at the General Assembly of the Presbyterian Church (U.S.A.) in 2012, performed for the American Guild of Organists’ regional convention in 2015, and was honored to perform at the National Seminar for Handbell Musicians of America in 2016. Of special note, Three Rivers Ringers performed with the world-renowned Pittsburgh Symphony Orchestra at their Holiday Pops concerts in December 2015 and December 2016 to great acclaim, with a return engagement of nine performances in 2019.

TRR put together two virtual concerts during the height of the pandemic, including TRR’s 10th Anniversary Celebration and Spring Rewind, which included a world premiere of a commissioned piece written by Jason Krug. Visit youtube.com/threeriversringers to watch both concerts. TRR returned to performing both winter and spring concert series in 2021-2022.

As part of its educational mission, TRR organizes and runs the Western Pennsylvania Handbell Festival, a biannual level 1 & 2 festival for beginning and intermediate ringers with massed ringing, classes, and workshops. Three Rivers Ringers also offers on-site workshops and mentoring for handbell ensembles and directors on request.

TRR released its first commercial recording, Ringing in the Season, in 2014, followed in 2015 by Jubilate, an eclectic array of original compositions by Stanley Leonard, retired timpanist of the Pittsburgh Symphony Orchestra. In 2017, TRR released Swingin’ Bronze, featuring American music from the ragtime, swing, blues, jazz and rock eras. In December 2019, TRR released its fourth album, Earth Shall Ring, filled with holiday music from around the world.

Three Rivers Ringers exists to advance the art of handbells.  We are available to give concerts throughout the tri-state area, and also offer educational programs for ringers and directors. For booking information, contact our Managing Director.

Biographies of the Artistic Staff can be found here.

Bios of the Three Rivers Ringers can be found here.