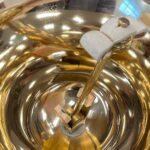 After years of fundraising and saving, Three Rivers Ringers is excited to announce the acquisition of a historic set of Whitechapel handbells to add to the instruments TRR uses in concert. This 3-octave set of handbells was cast during the Mears era at Whitechapel, dating back to at least 1865, though they were refurbished in more recent decades. The castings are in excellent shape and the bells sound beautifully along with TRR’s Schulmerich bells and chimes.

The Whitechapel Bell Foundry was the oldest company that manufactured bells, with a 450-year history of casting tower bells in the Whitechapel district of London. The most famous foundry in the world, Whitechapel cast well-known bells for many churches and state buildings, including the Liberty Bell, and Big Ben, which hangs in the Houses of Parliament. Whitechapel began making handbells in the 1740s, and they continue to be made by a successor company after the original foundry closed in 2017.

Whitechapel handbells produce a unique, mellow sound that is distinct from those made by the American manufacturers of English handbells. Three Rivers Ringers is excited to add these to its arsenal of instruments in order to help bring out melodic lines and add more color variety to its music. Watch the video below for a brief demonstration of the Whitechapel bells.

A huge thank you to all those who have donated to support Three Rivers Ringers over the years, who have helped make this possible.

You can hear the bells live in our upcoming concert series Season’s Ringings, from Dec 2 through Dec 18!